The Mystery Machine was a vehicle that appeared in the Hannah-Barbara cartoon and live-action movie series, and direct to video Scooby-Doo movies, Often driven by Mystery Inc member Fred Jones.

It was the main vehicle choice for Mystery Inc. The classic Hannah-Barbara cartoon version appears to have been based on a 1978 Volkswagen LT 40 Van. In all The earlier Hannah Barbara/Warner Brothers Direct to Video Movies from 1998 to 2001 the vehicle appears to instead be based on a Chevy Astro/GMC Safari full size van rather than a Volkswagen LT 40 van. In The What's New Scooby-Doo Episode entitled It's Mean It's Green It's The Mystery Machine and The Scooby-Doo and The Goblin King Direct to Video film The Mystery Machine van actually comes to life and gains an evil mind of its own and drives itself and tries to murder as well as attack the Mystery Inc. Gang and it's mystery solving members. 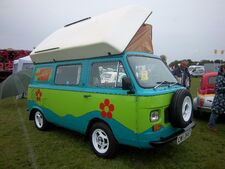